Home » What Are Common Signs of Depression in Young Men?

Have you ever wondered why it is that women are more commonly diagnosed with depression yet it is men that are more likely to complete suicide? While anyone can experience depression regardless of their gender, it affects everyone differently.

No two people with depression are going to have the same experiences. Perhaps the reason many men are more likely to complete suicide, despite not being diagnosed with depression, might be because their symptoms go unnoticed by others.

Common symptoms of depression in both men and women are feelings of hopelessness or sadness, but also feelings of emptiness. Exhaustion and different sleeping patterns are common, so is losing interest in activities they used to enjoy. But there are other ways in which depression manifests specifically in young men, and it’s important to recognize them whenever they appear.

There’s a lot of talk about sadness and feelings of emptiness, but young men who experience depression are more likely to be irritable and quick to anger. Their anger, in particular, might be entirely inappropriate for the situation they are in. Alternatively, they might feel more anxious than normal. They might have a feeling of being on edge without any real reason behind it.

In today’s society, it’s commonly encouraged for men to hide their feelings—to not show signs of “weakness.” Thus, rather than appearing sad, they may funnel those feelings into anger.

Young men in particular can struggle with feeling inadequate. It’s easier for them to become overwhelmed because of this. They might have a difficult time making decisions or focusing on tasks, no matter how easy they are. It can be very difficult to try to live your life when this is what you begin feeling like on a daily basis. 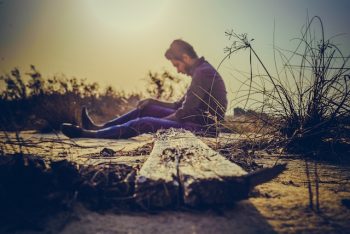 Young men with depression might have a tendency to isolate themselves, withdrawing from friends and family when what they need is their support. They might throw themselves into work or sports as a distraction, which might also lead them to neglect their friends, family, or even their significant other. Alternatively, they can engage in harmful, sometimes violent, behavior that ends up straining their relationships with friends and family.

Young men also have a tendency to engage in risky behaviors when depressed. This can be anything from reckless driving to unsafe sex. They can turn to drugs or alcohol, using it as an unhealthy coping mechanism. As long as they can avoid thinking about how depression is making them feel, anything goes.

Depression might be a mental illness, but it can also have an impact on people’s physical health. In fact, while young men are less likely to discuss the emotional manifestations of depression, they don’t seem to have a problem going to the doctor for physical pains caused by depression.

What kind of physical problems can depression cause? Headaches are common. Another problem young men with depression can experience is muscle pain. Digestive problems, such as a churning stomach, are also common.

High suicide rates among men could be explained by undiagnosed and untreated depression. That’s what makes it so important that we are all aware of the most common signs of depression in young men. Depression can be addressed and healed.

There’s no shame in seeking professional help, especially when depression is involved. In fact, it’s more beneficial to seek out the help you need. If you are a young man who is currently struggling with depression, remember that you are not alone. You don’t have to feel like this forever. All you need to do is take one step forward and make an appointment for depression therapy.